This album isn’t an easy listen. There’s a learning curve to loving A Lot Like Birds, and those who care to know the excellence will realize it after repeated listens. Conversation Piece has the life of La Dispute’s Wildlife with exponentially better instumentals, and the creativeness of the musicianship let it just barely slip past Oh, Sleeper’s Children of Fire. Kurt sounds better than ever, the guitars and drums are sensational, and this record will go severely under-appreciated on the 2011 lists. But not by me.

I really, really didn’t want to forgive Dallas Green for breaking up Alexisonfire, but Little Hell gave me no choice. Now with a full band, Green showed why he felt it was time to make C&C his main gig. Whether he’s bumping to “Fragile Bird,” playing downtempo to “Sorrowing Man” or going solo acoustic on “O’ Sister,” he continues to be the best voice in the business (and a tremendously underrated guitarist). Look for Dallas to become a household name next year. 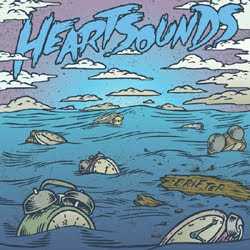 While you were all defending pop-punk, you missed the best melodic-punk record of the year. The co-ed punkers are criminally underrated, despite releasing one of Epitaph’s strongest 2011 records. It’s fast, it’s heavy, and it’s perfect. The intro to “Race To The Bottom” is my favorite 55 blistering seconds of the year. Go take a gander and see what’s out there besides pop-punk.

It’s Foo Fighters back with Pat Smear – what did you expect? It’s the best end-to-end Foos album since The Colour & The Shape, and I couldn’t have asked for more. The record earned some extra credit from the Foo’s documentary outlining their history and analog recording process for Wasting Light, which certainly helped it’s case. And you love “Rope,” whether you admit it or not. It’s nice to have Dave Grohl back in the spotlight.

It’s a little expected, but that shouldn’t take away from the album’s magnificence. Dustin Kensrue showed once again why he’s the best songwriter in the business, working with the always-stellar Teppei and Breckenridge brothers to make the year’s best album. Major/Minor has dominated my car’s stereo for months, and it isn’t likely to move anytime soon.

Most Anticipated
Say Anything, fun., The Company We Keep, Bad Rabbits.

Check out some of my favorite tracks from 2011 here!