I Never Heard The Bullet: Moving With Grace That Men Despise 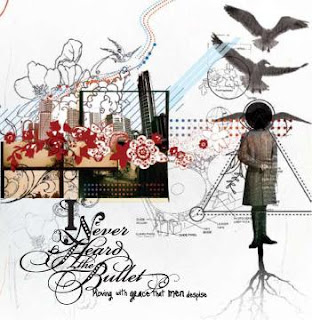 As of late, I have become a huge advocate of EPs over full-length releases.  It seems to be far easier for today’s bands to pack a huge punch into 5-7 songs than 12 or 13 tracks.  With six songs, I Never Heard The Bullet‘s debut EP is damn near perfect.

If Anberlin’s Stephen Christian and Fall Out Boy‘s Patrick Stump had a love child that was taught to sing by ex-Dance Gavin Dance/Emarosa vocalist Jonny Craig, you’d have Motaz Hussein of INHTB.  Hussein’s vocals across the entire album are stunning, combining the R&B crooning with edgier vocals to perfection, much in the vein of Jonny Craig.  While the group certainly will be classified as melodic post-hardcore,  there is a fair amount of pop-sensibility here that makes the music very easy on the ears; mom and little sister will not hate you for playing this in the car, even with the occasional scream.

Motaz certainly deserves a spotlight, but musically, the rest of INHTB does an amazing  job.  Jesse Swain and Dustyn Fleming have great taste, knowing exactly when to step to the forefront with a dual guitar attack.  Every band needs a rock, and this band is blessed with two in the form of Tabor Brady and Kaycee Kay.  You will never mistake either of them as the stars of the group, but Brady’s smart bass-playing and Kay’s great drumming provide the foundation that Moving With Grace That Men Despise is built on.

The beautiful piano-lead opener “Intro” flows directly into the fantastic “Strike Three,” an early contender for best song.  After the energy-packed verse and chorus, a beautiful breakdown with piano and soft vocals leads back into the dual-vocal ending.

“This Has Controversy Written All Over It” hits just as hard as its predeccesor, but with a sing-along chorus.  $5 says that you can’t get through the second chorus without singing “what makes you think, you’re moving forward” (granted, you’ll be in falsetto trying to match Motaz’s outrageous voice).  It becomes apparent only a few seconds into the song that the production of the EP is flawless; you can hear every individual instrument in each song, all with a ton of power.  A masterful and subtle use of synths, piano and screams offset the band’s melodic strengths extremely well.

It’s natural to overlook rest of Moving With Grace That Men Despise when the first three songs are killer, but it would be a huge mistake to not finish your listening.  “My Sidekick is My Only True Friend” is in the same style as the former tracks, and features  an intersting melody that should catch your ears.  “10 Ways To Sneak Up On A Ghost” is probably the catchiest track, especially in the verse, which leads into a slower, melodic chorus.  The song ends with a great double-bass breakdown with Motaz wailing right over it.

Most EPs shy away from ballads, but “Distance Makes The Heart Grow” serves as a perfect closer.  Excellent high-hat work anchors this track that could definitely be mistaken as an Anberlin song (Which is far from a bad thing).  Once again, the piano playing here makes the song.  Majestic overlapping vocals end the EP in epic fashion.

I pray that I Never Heard The Bullet’s EP is only an appetizer of what’s to come, because I definitely want more.  This CD is damn near perfect, and belongs in any melodic post-hardcore fan’s library.