The Sound of Madness is one of my favorite rock records of all-time, so I highly anticipated Shinedown’s follow-up, Amaryllis. While it is in the same vein as their previous release, I love everything about it. Whether it’s the psychotic, adrenaline-laced fast songs or the slow power ballads, not a single song on this record ceased to amaze me. The songs are extremely well written, and the album’s smooth pacing and comfortable composition perfects the band’s crafty hard rock two-face of soft and heavy elements. Not another rock album of 2012 can touch Amaryllis. In fact, not many rock releases of the past decade can touch it – with exception to The Sound of Madness, of course.

I’m not the biggest fan of Every Time I Die, but Ex Lives gave me a good reason to love the New York metalcore quintet. This record is a whiskey-soaked wasteland of rock, punk, and metal, and it’s something truly unique. New Junk Aesthetic and The Big Dirty are solid albums, but Ex Lives is Every Time I Die’s shining star. The record is served with meaty helpings of metalcore, and a side order of ubiquity. Ex Lives is just all over the place; yet, it retains a consistent vibe throughout, and stays true to the band’s typical chaotic succulence. I mean, who doesn’t like an album with a song titled “Underwater Bimbos From Outer Space?”

3. David Crowder Band – Give Us Rest 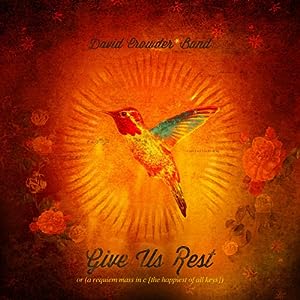 I’ve been a Christian all my life, and I just love worship music. However, I can also be quite picky with my selections. David Crowder Band has been a constant Sunday morning selection. With Give Us Rest, the band’s farewell album, the band went out in style. The album is a 34-song masterpiece, ranging in influences from rock to folk to indie to metal. The worship anthems are crafty and memorable, providing Christian radio stations with an excess of great new singles, and more experimental tracks called the “Sequences” showcase the band’s out-of-the-box thought process. Give Us Rest is an epic conclusion to one of the greatest contemporary Christian artists of the last decade, and it’s easily my favorite worship album of all-time.

2. The Ghost Inside – Get What You Give

I recall saying in my review of this album back in June that “hardcore is a haven to me.” The Ghost Inside is the epitome of this haven. They represent everything great about hardcore, and they are the reason why I continually have faith in heavy music. While Returners was full of hard-hitting, gut-splitting metal anthems, Get What You Give surpasses it in every way. The band’s newest offering works with more emotion and inspiration than their previous work. The instrumentation is perfected, including an array of excruciatingly heavy breakdowns and the addition of clean vocals (produced by A Day To Remember’s Jeremy McKinnon). Get What You Give really fulfills its title, as with the 12 songs off this record, I really got a bang for my buck.

And now, for my number one album of the year, *drum roll please* Vital. After two decent efforts, Anberlin has returned, and they learned from their mistakes. With Vital, the band worked with producer Aaron Sprinkle, who produced their first three albums, and they went for a heavier, darker approach. The end result is an album without a weak track. “Self-Starter,” “Little Tyrants,” and “Someone Anyone” are flawless alternative rock hits, while slower songs such as “Type Three” and the fun.-esque “Innocent” are unfathomably fantastic. It’s really hard to put into words exactly how I feel about Vital, because it’s just such a good album. This is a special album that takes full advantage of Anberlin’s potential, knowledge, and emotions. Just how Cities defined the 2000s, Vital will define the 2010s as one of the decade’s best albums.

Most Anticipated For 2013: A Day To Remember

Editor-in-chief of Mind Equals Blown, I've been on staff since 2011 — before I even knew I wanted to write for a living. My passion lies in the punk scene I grew up in, and it's led me to a deep love for all sorts of heavy music. On the site, I combine both loves (as well as my love for film), shining light on true artistry in our scene. I'm also a lover of Chipotle, Cherry Coke, vinyl records, and baseball.